We have contributed two tracks to the Shared 2 compilation album, the brainchild of Miles Hunt from the Wonder Stuff. Miles produced both of our songs - Tropical Rain and Six Years - which drummer man Paul recorded during sessions in south London. The version of live favourite Tropical Rain is a stripped back, chilled take while Six Years, an older, darker song, features some mind-blowing strings played and arranged by Erica Nockalls. You can hear both tracks here. The compilation also features some very cool music from Miles and Erica, Boo Hewerdine, Jim Bob from Carter USM fame, Dan Donnelly, Damien Dempsey, Brentlee, The Daughters and Ian Prowse from Pele and Amsterdam. As you can imagine, the album is packed with great music from some better known songwriters as well as imspiring material from breakthrough artists. If you are interested in beautifully-crafted songs and discovering something new, it's an essential purchase. You can buy the album here or pick up individual tracks from iTunes and Amazon. A Shared festival is on the cards later this year, so stay tuned! 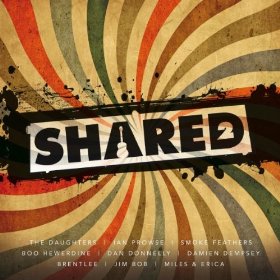